A U.S. $9.8 Billion Opportunity – Universal Acceptance of ALL Online Identities

A U.S. $9.8 Billion Opportunity – Universal Acceptance of ALL Online Identities

You might expect the Internet to work for all languages. But right now, it doesn’t, and it’s leaving money on the table for businesses and cutting into how organizations can connect with their communities.

With the expansion of the Domain Name System (DNS), people now have the option of creating domain names (and email addresses based on those domain names) in their native language (संगठन, .онлайн, شبكة , etc.) or using domain names that better reflect their sense of identity (.PHOTOGRAPHY, .PARIS). These new domains offer greater diversity in how people and organizations represent themselves online; however, not all websites or online systems recognize these online identities as valid. This is particularly problematic for speakers of languages that do not use the Latin script, who are significantly underrepresented online.

While the benefits of making the Internet work for everyone are seemingly clear, we now have metrics that help point to the opportunities of having software systems work in harmony with the common Internet infrastructure.

We commissioned technology consulting and research firm Analysys Mason to develop a white paper report to show some of the economic, social and cultural benefits of Universal Acceptance (UA) of all Internet domains. They looked at it from a high-level qualitative and quantitative perspective. What they found was interesting. 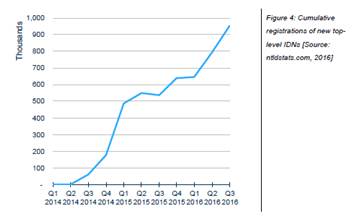 From an economic standpoint, Analysys Mason conservatively estimates that there is a potential U.S. $9.8 billion growth in potential revenue from both existing users using the new domain names and from NEW internet users coming online through Internationalized Domain Names (IDNs). This is a conservative metric as this figure does not take into account potential future growth in e-commerce spend or in the registrations of new domains. It also looked at just five major languages and language groups that would benefit from IDNs –Russian, Chinese, Arabic, Vietnamese and Indic language groups.

From a social and cultural perspective, it showed that when governments and non-governmental organizations (NGOs) become UA-ready they will be better able to engage with their citizens and communities who want to choose their own identity with their own domain name, whether in English or non-English scripts.

Now that the benefits of UA have been at least somewhat quantified, how is UA achieved? The good news is it can be addressed quite easily through what can be described as a “bug fix” or routine update to online systems. Through their research, Analysys Mason found that the efforts for software and application owners to implement UA are not particularly onerous, and are outweighed by the benefits that could be realized by doing so.